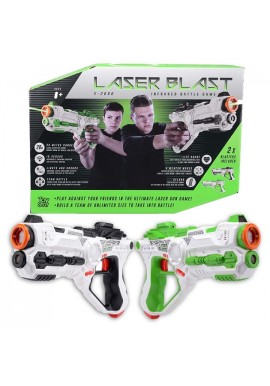 Laser Blast X-2000 is the futuristic gun battle game for up to four teams and an infinite number of players. Eliminate opponents by blasting their gun and use stealth tactics to protect yourself and your teammates from enemy attacks. Ready, aim, Laser Blast! Features & Specifications: Pack includes 2 Laser Blasters / Blasters work using infrared (IR) technology / No need for any other equipment – the gun is the only target / Play with 4 teams and an unlimited number of players / Play inside, outside, day or night / Team button to select team colour (Red, Blue, Green or Black) / Ammo reload button to rapidly reload / Weapon button to choose from 4 weapons (laser blaster, single shooter, rapid shooter or rocket launcher) / Lights and sound effects for realistic action / Blaster vibrates when you blast it and when it receives a hit / Life gauge to keep track of remaining lives / Each gun requires 3 x AA batteries (batteries not included) / For ages 6 years and over.


Your Review: Note: HTML is not translated!

Enter the code in the box below: